Nowhere To Go and Nothing We Can Do 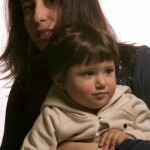 We were looking from the balcony on the 15th floor at the Mediterranean spreading its waves on the wounded shore. Smiles coming at us through the windows from the high rise buildings near by. Children finally escaping their homes were checking to see if their neighbors are still alive… screaming in joy. Flocks of pigeons were flying across the sky wiping away the smoke and clearing the intense noise of the earlier bombing. Ceasefire was announced.

We stayed up most of the night — the bombing was too loud and we couldn’t sleep when our beds were shaking. So, we spent some of the next day catching up on sleep.  During the bombing, I was in a most helpless state, there is nothing we can do – but inside of there was a feeling of power. I wanted to say to those concerned that we are here and we will remain. If we are injured, killed, or displaced along the way, it is understood that it is part of the journey. It is our journey. No need to quit here, because it will not help anyone. I felt capable but I wasn’t doing much by outside standards.  I was taking care of the little baby growing inside of me. She was 7 months old. With every bombing, I used to hold her, hold my round belly with both arms. Because each time an airstrike hit nearby, she would feel a few moments of my entire body, the body that was carrying her, frozen in shock. Then, when I closed my eyes and breathed, I felt her move and I would tell her how brave she was. With a few breaths in and out, my body told her that it is going to be alright.

Being under bombing –not that you are being physically bombed or shelled yet, but it is happening nearby and it’s continuous — it puts you in a new state of mind that starts with thoughts of: am I brave enough not to shake when the strikes hits? Am I brave enough not to suddenly cry and be able to hide my fears? Am I wise enough to think that life and death are simply what we are… one can’t escape one or another. It is just the way we are.  It is how we are introduced to either one that differs. Then, at very practical level of questioning, one starts wondering, how can I make sure I sooth myself, keep physical stress to a minimum.  I am pregnant and it is a one I have longed for.  I want this baby.  How well can I sleep, keep my body calm, knowing I will wake up in a terrifying event. How can I be ready for the next one? Can my heart listen and believe that it must continue its regular pace of beating?

Most importantly, am I keeping my common sense about what is going on in the bigger context? That is; we are not the only ones in a conflict, rather there are millions who have suffered and are still suffering. Or, is it worth it? Who decides what is worth dying for? Even when you are in your most courageous moments, and your beliefs are so strong that fighting is the way to release you, once a human being gets into real pain, you stop and re-think this whole thing. Every life matters. And every life should be lived decently not just lived in survival. The question gets only harder when the threat comes closer. Last summer, we felt it more than ever.

All the people I know know people who were killed or injured, and certainly we all knew people who were displaced. So many displaced. It is so precious that one can be at home with no threat to suddenly evacuate or be directly attacked. Home is our stability, it is our base. It is where we are able to stay within our feelings and not be afraid to show them.

One day we had to leave after hearing rumors that our building will be destroyed. Preparing the emergency bag took an hour in real time, but took many more to collect the important things that have so many memories – which ones to leave which ones to take. This definitely took longer than the time of an airstrike.

Thankfully – we didn’t contribute further to the increase in the number of refugees – our borders were closed for travel so there was only internal displacement within this 370 km2 – geography that is twice the size of Washington, DC but with three times its population.  We were praised for resilience because we were not able to escape and take refuge elsewhere. We managed to survive and stay sane.

One:  Believe. Believe that this is where you belong even if your family brought you to this place a few years or decades before. It is very helpful to acknowledge that we are here because it is meant to be and whether you are here today and somewhere else tomorrow – both here and there have some kind of test. This is the one that is yours now.

Two: Stay connected. Just live who and what you are without trying to live other’s story, yours is good enough. You do not have to act as if you are another superhero you see on TV or even a brave woman who is standing still after watching her child being killed.

Three: Spend some time in silence, a precious commodity in a war. Listening to the silence is sometimes a lovely practice. Going deeper into silence and filling your mind and body with it may help give you a moment to come back to yourself and process the noise.

Four. Yoga with its deep breathing and stretching is good. But don’t be too ambitious. The best practice of yoga is different in the circumstances of war. Some times when I practiced a posture of total relaxation I could only cry or fall asleep.  This was all right. I was not able to face and endure the amount of fear and tension in my body and remain connected.  On the mat, you collect the pains you check in with everything heart beat all the parts that were challenged by fear and anxiety. You praise your commitment to the self. You bring the joy of good energy. All starting at one side of the mat continuing to tell a story of this exhausted body.

I had been doing yoga for four 4 years and  I was lucky to have been taught by someone who realized the difference between the colorful, fancy, fit and clean yoga magazine kind of practice and the practice in a war zone.  At her class, we would either bring the memory of the bombings of the night before, or this would be waiting for us and we would we experience it together. F16s flying at low altitudes, an airstrike here or there. As we have gotten used to this in our daily life, we would test it while practicing focus and inner connection. Observing reactions of our bodies giving them space to be present even in the most awkward and difficult moments.

Five: My infinitely patient husband and I play backgammon with tea or coffee and we even sit on the balcony when it is not entirely a good idea. Joy can come from unexpected activity.  Remember some games we played as children.

Six: With a positive and optimistic partner, I was able to embrace fear and live with it rather than acting brave.

Seven: Social media helped.   I made the best use of it. But here were days without internet.  Whenever there was internet and electricity, I used it to communicate on Social Media. Connect with new people who were and still are concerned about our situation and friends who would wait every day for a message on Facebook or twitter to make sure we were still okay. Sharing our daily stories was mutually beneficial.

Eight:  Being positive was my savior. Intense negative feelings are contagious. They transfer, grow and expand, especially fear/anxiety. If anxiety gets out of control it will likely affect others. Once faced with assurance and a sense of ‘safety’ – even imaginary safety – negative feelings diminish, or at least they don’t stay persistently.  They are not constant.  I learn to pay exquisite attention to what is going on inside of me.

This was a time when there was nowhere to go and nothing we could to do to change our circumstances.  Keeping fear in perspective is what we tried to master – being aware of what was going on inside us.  Letting things go – might be the best and only thing to do.  Let go. Just let go.

Najla Shawa is our guest writer and is an associate.  She is a wife and mother of two children and has lived in Gaza all her life with occasional visits to other countries. and is a humanitarian Aid Worker there.  She has a wise and unusual perspective.  She holds a degree in Public Policy from George Mason University.