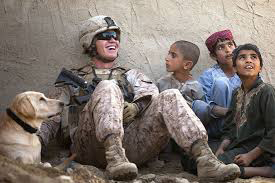 Angelina is small women from a protected  Italian-American family in a small New York community  She joined the military for school benefits before 9/11 and thus, before the war in Afghanistan.

Her first impression of warfare was seeing shots of the Gulf War on the six o’clock news, sitting with her mother and grandparents, seeing the explosions on their not so good TV and wondering if the people being bombed were still alive and if their families were all right.  She worried about them and was glad she was not wherever those scary things were happening.

Unlike her father and grandfather, Angelina had no war.  But the Afghan war became her war. Continue reading