The Shooting of Freedom in Kosova 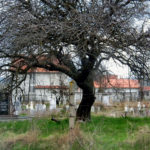 For twenty years, the Albanian people living in Kosovo were treated like second-class citizens by the Serbian population. In an effort to force Albanians to leave Kosovo, there were tight restrictions on what the Albanian population could and could not do in their  country: their children weren’t allowed to attend formal schools, their sick weren’t allowed to seek medical care from hospitals, activities of their cultural organizations were restricted, and unemployment was high. But instead of fleeing their country, Kosovar Albanians were resilient and learned to adapt. Their determination and refusal to give up their country led to war.

The story of our tragedy began in 1998.  I was eight years old, the youngest of five children in my family.

I heard the news on the radio and television that the invaders’  had intensified persecution against the Kosovar civilian population, against the activities and goals of the Albanian people for freedom and every man who would dare to think about freedom. For one-hundred years, the Serbs had been trying to wipe out  Albanian culture and identity, using force,  killing and torturing. The beatings, harassment, and persecution continued across the country. The enemy knew when the  revolt was planned, and used kidnappings, beatings, shooting, and torture to prevent it. My grandfather was tortured by being held in water that was -20°C. Day by day the rope came and grew tighter.

It started on an ordinary day in the spring, as the neighborhood children were playing in my backyard – games like volleyball, football, sticks and balls, and even mud. Suddenly, we heard a barrage of bullets which were more intense than usual — this time not stopping accompanied by caliber artillery. Our game stopped, and while all the others scattered to their houses, I was completely shocked and stood motionless while following the story, another version that had just begun. Then I heard in the streets, the rattling of cannons and tanks, but also the sweet response of rifles. Were these the shots of Freedom Fighters  signaling the open resistance of my Albanian people in Kosovo?

Soon the roads were cleared and the village was silent. We saw the smoke coming out of houses that had been burned. Sixteen Albanian warriors were murdered by the enemy that day but they succeeded in their mission – protecting the civilians. Although they gave their lives for us, they will always be with us – the living – in our hearts. Tears came and did not stop, our hearts split in two. We heard the moaning of the martyrs who were dying among others who’d been killed. The land smelled like smoke flames and flesh coming from burning villages.

The war had begun. With it, my parents’ worry.

We were 5 children between the ages of 8-15 years of age.   I was the youngest  Not much later, the time of moving out of the house came. It was the worst moment of my life, indescribable feelings of fear, pain and longing. Pain from having to leave and longing that we would not have to.  We left our house, the garden, and everything we had. Spring had stopped for us. Towers collapsed, meadows burned. And every inch of ground roared from the bombing offensive. The occupation had been taken against us just because we were Albanians, just because we spoke the most beautiful language in the World, and just because we dared ask for FREEDOM.

We left by a long mountain road, and everywhere heard gunfire contrasted with weeping erupting through the silence of the night. The mountains resounded with gunfire from the enemy punctuating 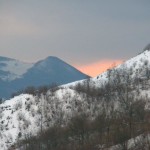 the determination of the invaders, and with that,  the screams and crying of civilians trying to escape. There was much sadness. And even more chilling was the fact that we did not have even the slightest idea about where we were heading, or what awaited us on the other side of the hill that day. We thought this might be the end for us, as it was for many others.

We snuggled deep in the mountains to avoid the bullets pouring from wherever you looked. The sound never ceased, the thirst for blood was great that day.  Anyone who had fallen along the way was killed. The evening came with a Grace-like  silence reigning everywhere. The babies and young children were wrapped up by their mothers, in an effort to prevent them from seeing the horror of our plight and keeping them warm.. But they were experiencing the horror with us. We were without food, water, and shelter. We, heard only a few babies, softly weeping. We had travelled past the long-beautiful oaks of our motherland, now on our fifth day in a row walking under the open sky. We remained anxious about what awaited us this time. We had not eaten for 3 days.

After that, the situation calmed down somehow, but still we continued our journey to the capital (Pristina) hoping that there we would find peace. We were exhausted from walking twenty kilometers each day, and were dejected because we had been exiled. With the help of several friends, we found a temporary residence where we spent the next 6 months. In the moment we thought things are getting better everything just gone worse. At the meantime we were happy for the roof that we found there, but it was winter, a hard cold winter, we didn’t have woods for the fire to get ourselves heat , we didn’t have enough food to feed ourselves. Even as a child I remember everything, on returning back from school  I used to stop to the markets to get papers and carton to get warmed at least before bad time. The next six months gone like this, but everything stopped in a morning when Serbian barbarians came to get us out even from there. They used brutal force on everyone by trying to show us their “force” that they poses by holding their weapons, they emptied the whole capital that day and brought us to the train station, to transport us with freight train to the border of Macedonia. At the border we waited for ten long days in an open sky, without roof, without food without anything at all. For six days rain did not stop and everyone get wet for the next days, it was terrible time and only on the eleven day we could pass away to the next station…

We then spent another 3 months with a wonderful Albanian family in the neighboring state of Macedonia. They all were kind and lovely and they have done everything to help us, to make us feel like home. They provided a home for us, good food to eat and a pure love on welcoming us.  After the military intervention of NATO, the head of this Albanian family went back to his home where he found everything burned to the ground and houses destroyed. But love of country was greater than the booming barbarian army and from that day he continued life during wartime broken now in peace…!

Barbarians had beaten and mistreated our people, emptying every corner of the country, evicting Albanians from Kosovo as part of the ethnic cleansing of Albanians. From their home country of Kosovo to the neighboring state of Macedonia and Albania. But all that sacrifice wasn’t for nothing, all that bloodshed brought us the FREEDOM. Now we could smell freely in peace. It was what we wanted for centuries, what we were fighting for. Just to free our homelands.