Flora: Tanks in the Front Yard 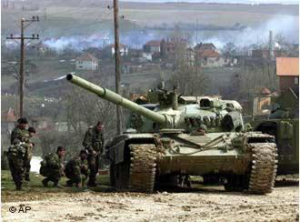 Flora, a 50 year old woman, and mother of six children, is from rural Drenica Valley in Kosovo, the valley that was the hardest hit and most destroyed by war. When the war started in Drenica in February 1998,  Flora’s civilian husband, Faton, was attacked in their home by the Serbian police several times and nearly beaten to death in front of Flora and the children. When the beating was over, Faton knew he would never be safe in this world, so he left for the mountains with their 20 year old son. To justify the beating, the police used the pretext that they heard that Faton had weapons, even though they never found any. In general, the police justified abuse calling the people from Drenica terrorists — the men were always in danger as the police could enter homes whenever they wanted. They abused, harassed and threatened people, often killing them. After a while it became clear, they wanted to exterminate all the men, including boys.  So they were gone and who remained were children, women and old people.

So Flora stayed behind with the rest of the children. She continued her life making as many as seventeen loaves of bread a day for her family and for others hiding in the mountains. During some nights, the men came home for food or other necessities and to see their wives and children.

The 18 of September 1998 is a date that I will not forget till I die. The men from the village along with my husband and eldest son hid from the Yugoslav/Serbian forces that had been fighting Kosovo Albanians since February. As usual, I was baking loaves in the kitchen when I heard a loud noise and our very old house began to tremble. I ran outside to see what was happening and was completely shocked to see Serbian tanks rumbling through the street.

We lived at the edge of the village so when the tanks stopped before entering town, they stopped near our house.. I looked down the road and saw families, many mothers and children, leaving and moving quickly toward the mountains carrying what they could but I couldn’t go with them –I was completely unprepared, the loaves were in the fire, and I had no other food prepared so even if I wanted, I couldn’t go, my children would go hungry in the mountains.

There was no question, I decided to stay. When the rumbling tanks arrived, my children surrounded me terrified. I reassured them as I thought the soldiers wouldn’t harm defenseless women and her children. But when I saw the tank full of soldiers directly pull in the front of the house, I realized my mistake.

Five armed men jumped out of the tank and came in the house, one after another in clunking boots with no care for our home. And I remember they put black masks over their faces immediately. I motioned to my youngest daughters to come stand close to me. We gathered together, all of us, me and my children as they ordered us in their Serbian language to go into the basement of the house. My youngest daughter was 13 years old, another was 15, and my older daughter was 18.

I have heard that some woman during the rape lose consciousness but I was totally aware of what was happening, though at some point, stopped thinking. I heard the screaming of my daughters begging them to kill us. I couldn’t believe that what was happening was real. It cannot be described in words how I felt as a mother hearing my children screaming for my help and being able to do nothing, absolutely nothing. “For the sake of GOD, please kill us.”  I begged the rapists but they were laughing — ‘we don’t want you dead.’

I wasn’t afraid of dying; I could see Tringa, my 13 year old daughter crying and looking at me for help. My daughter Lule had a shoulder injury of some kind.  I told my daughters to stay silent, to be quiet. I didn’t know how to make their fear go away. I still remember that feeling.  They kept us in the basement for around two hours but for me it was a hundred years of terror, and helplessness.  We were all shaking and naked.

They left in the early evening, just like that, to check the other houses, I guess.  We went upstairs still naked and found my son terrified and cringing in the corner of the room. I got clothes for my daughters and tried to calm them, helped Lule with her arm, and we stayed all together close, trembling and shaking and waited to see what would happen next.

At nightfall (we were still quivering – I had taken bread from the oven, some burned), an old uncle came to the house.

When I told him what had happened, he ordered all of us to “bury” the experience, saying the rapes were “a bigger tragedy than being murdered.”

That night we took an oath, my daughter and me that we never will talk about what we experienced.

My husband is very patriarchal man, and I knew that if he understand that we were raped he would prefer killing us with his own hand than fe el that much shame. Some women were killed by their husbands.

Flora was breathless as she told the story.  She asked for water.

My youngest who was 13 years old at the time of the rapes has been psychologically traumatized ever since. Another one of my daughters Lulja, also traumatized, had her left shoulder dislocated.

Afraid of bringing shame and isolation on my family I remained silent for all this years, even I   watched the heavy toll silence has taken on my family.   Two of my  daughters left the country after the war.  They live in Finland and for years they have been in psychotherapy because of their suffering from PTSD, anxiety and depression . Tringa, the youngest one got married, only to be rejected by her husband when he found out about the rape.  I begged her husband not to tell my husband why he was divorcing Tringa because he would kill us.

Tringa lives with us and she is very depressed.  She never wants to go out.

After the war I had another daughter, she was born with Down syndrome.

For myself, I never told my husband about the rapes. Instead, I told him that my daughters and me were beaten as a way of explaining the anxiety and depression they’ve suffered ever since. Me as well. My husband says rape would dishonor the family; during the war, he threatened to kill me more than once if I were ever “touched” by a Serb.

How can you talk to such a person about this?” asks Flora, who confessed she told her husband she was traveling to Pristina for a doctor’s appointment about her daughter with Down syndrome rather than meeting a psychologist.

I would really prefer it if they had killed me, instead of letting me survive.

We women who were raped and tortured don’t feel any pleasure in life. When your husband doesn’t know what happened to you, then you aren’t able to express yourself to him about anything, and you never feel good. Even if we were talking in the most beautiful moments, I hold back and then, I’m in the worst position. And that’s the very worst thing that’s happened.”

Beside the rape experience, me and my family spent the rest of the war as displaced, forced from village to village by the ethnic-cleansing campaign and under threat from the NATO bombing campaign aimed at driving enemy forces out of the Albanian-majority territory.

But  after  the terror my daughter and me experienced, my ordinary fears melted away, and I often found myself  reaching out to help fellow displaced women.

I had lived through a real trauma, and I didn’t want other women to experience the same thing. I couldn’t even scream anymore. I felt no fear.

During the war we were closed in one village mosque. The mosque was surrounded by the enemy that threatened to kill us all.  We were all woman and children.  All terrified but I acted like a leader there. I told them not to fear death.  They were all in panic and needed encouragement. I gathered all children and telling the story how one day the war will stop and we will celebrate all together in Freedom. They needed to hear these words. I just took the attitude that we had to move ahead and not look back.

After two days closed in that mosque, the enemy let us go. They put us in buses and took us to the Macedonia border. My daughters, my son and I stayed in a camp for a month knowing nothing about my husband and my older son, because we left them in them in the mountains. We were worried about them. But, I was also scared to see him because of what had happened to us.

After the war was finished we immediately came back to Kosovo where we found my son and husband both at home. The house had been ravaged, everything taken or smashed but not burned.

Before the war, we had a horse and two cows but they were killed. They were how we made a living. With my children just having an elementary school education while, me and my husband had just three year education.  So, it was very difficult for us to live, but one humanitarian organization helped us with 10 goats and for these years since the war years we bred and raised the number of goats, so today they are our source of living, for my 10 member’s family. Today we live in very difficult economic conditions but nothing is more difficult than having to remain SILENT.

I have hidden our secret for 15 years, and I know that thousands of my sisters do the same. I know woman who live in a misery and they need support either financially, emotionally or morally.  I hope in sharing my story, people will know what we experienced and instead of judging us, will support us and help persuade other Kosovars to finally acknowledge this painful chapter from the past.

Before the war, the best Holiday for us was Bajram Holiday. Before the war we enjoyed the Holiday. One week before we women prepared everything together with great fun and then during the holiday, shared our food and joy with all our relatives and our neighbors. We celebrated three days. The first day, we wore our best clothes – the adults and the children and lunched together with our close family then in the afternoons we went out in our neighborhood to eat and decide who made the best cakes.  On the other days we went to relatives or waited for relatives to come to our home but now I don’t feel pleasure about much of anything.

It bothers me when Bajram Holiday comes because instead of bringing the biggest joy, I always feel tormented because my soul has been killed. And I think most of us who experienced war feel like that and I know many years will pass, generations even before our people start to enjoy the holidays as we enjoyed them before.

I would do anything to see men talking openly to wives who have been victimized by the enemy, Woman first of all should be supported   by their husband. Suffering in silence is killing me day by day.   If I don’t get anything out of telling my story, maybe someone else will. I may have lost a battle, but I don’t want others to experience the same.

We need support, support from the state and support from society. When that happens, that’s when we’ll be at peace.