When I say I’m a grandchild of Holocaust survivors, this is what I imagine you hear: “I am claiming an important piece of Jewish history as my own.” “My grandparents experienced horrific pain and trauma, but they survived.” “I stand by the clarion call of ‘Never Again.’”

When I say I’m a grandchild of Holocaust survivors, this is how it feels: I startle and jump at loud noises that don’t seem to startle anyone else. The basement of my body sends me messages not to love people because they will be ripped from me and killed. (Who will do the killing? It doesn’t matter. Logic doesn’t inform this.) When I deal with bureaucracy – faceless, nameless, blameless bureaucracy, bureaucracy that feels like a smooth stone wall that goes on forever and has no cracks – I am terrified. My throat tightens. When an official letter comes in the mail, I am tense even before I open it, waiting blank-minded for the bad news to appear. Expecting my life to end like an overturned bowl of milk, like entrails that can’t be stuffed back into the cavity of the belly.

I appear to bear the bodily wounds of a trauma I never lived.

I am not a victim. I was not killed in Auschwitz like my uncle Yaakov. I am not a survivor. I did not live through Auschwitz like my grandmother Sally, whose hugs cracked my child-ribs, who secreted napkins wrapped around food around her nursing home room.

I do not have PTSD. I do not have flashbacks, because what mental movie reel would my mind replay? Memories of growing up in Jewish Toronto, safe? Memories of peering at my grandfather Meilech’s tattoo while he peeled apples in a warm yellow kitchen, safe? Memories of Yom HaShoahs observed yearly in day school, made to sing ‘Zog Nit Kein Mol’ (‘Never Say That This Will Be The Last Road For You’), safe? Memories of watching Schindler’s List with my sixth grade class, then sobbing during recess, safe? Memories of visiting a resurrected synagogue in Krakow, crying, while my Polish Catholic boyfriend (he-will-never-understand) waited for me at home, safe?

All of my memories belie the fear that fills me.

My fear looks like a gray monolith, a massive seeping stone that can walk, that drags me along behind it. I have respect for my fear: it’s so constant, so resilient. I am revolted by my fear: it’s unsightly, so shifty, so chameleonic. I am attached to my fear: maybe it’s the only birthright I can claim as my own. So how could I even try to let it go? To ask it to let go of me?

Last week the students at the university where I work put on a Holocaust commemoration program. They wanted to display poster-boards and read lists of names in a cafeteria on campus. So I printed a list of murdered Jews from the Yad VaShem website, 86 pages long. We read the names aloud for two hours, as students walked by, embarrassed, or ate French fries, embarrassed, or paid no attention whatsoever, unembarrassed, as they should. (At a certain point, on a large enough scale, death and its memorializations become embarrassing. There is no way to properly honour a genocide. The sharpest feeling it provokes now may only be discomfort.)

We read names of murdered Jews for two hours, then cleaned up. And I was left with a stack of papers – 86 in number – with the names of thousands of dead. And I was stuck: What was I supposed to do with these pages? Frame them? Burn each one reverently? Throw them in the garbage? How should I memorialize the dead who are not-mine, when I cannot fully mourn my dead whom I never met, of whom I am a heavy echo?

They didn’t talk about it and didn’t want to.  They changed the subject when it was brought up by the young people  — what happened? 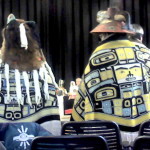 Silence — a non-response common throughout the world by those who have experienced brutal defeat, genocidal actions, sending Native children to schools, decimating families, preparing the way for segregation and racism.  The shame is nearly unbearable.  So Silence.

Nancy didn’t know the specifics of her people’s pain —  depression, alcoholism, early “accidental” deaths, prison fora  small demeanor, the school dropout rate.  But in high school, Nancy learns that her  people, the Haida of southeast Alaska, had been colonized by Russians, British and even the Spanish starting in the 1700’s and then ultimately the land we know as Alaska is sold to America by Russians — Seward’s Folly. 1867. Continue reading