It’s Never Over– three generations out 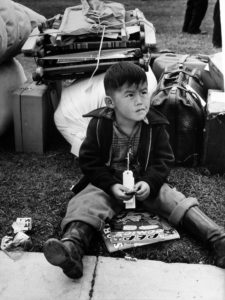 “We raised you to be individuals first and Americans second.  We didn’t really think about being Japanese.”

I think my mother was telling her conscious truth, but I think the whole truth was more complicated.  If you are arrested and imprisoned in an internment camp (WWII) for your race & ethnicity, then after you’re released how do you show you’ve reformed?  The implicit answer is to lose or hide your race and ethnicity and that is the way I was raised.  When a white friend said, “I think of you David as a white person,” I thought, “That’s great, that’s what I want to be.”  I was pretty much in denial about being a Japanese American, Asian American or person of color until my late twenties when I read Frantz Fanon’s Black Skin White Masks.  It’s taken me two memoirs, a novel, four books of poetry to explain and explore my own identity and family history and I’m still doing that in my writing.  For me fighting for racial equality involves both outside struggles and continued struggles with my own internalized racism.  And that involves trying to free myself from unconscious constraints by making those constraints conscious through writing about them.