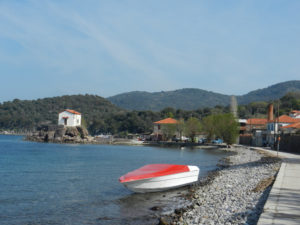 The radio crackled loudly in the room, jarring us from our sleep. It was not yet 6 am. I sat up in my sleeping bag, trying to discern something intelligible from the static. It was my third day volunteering on the Greek island of Lesvos. One of my roommates translated the cackling for me. “They’ve seen a boat filled with about 70 people crossing from Turkey, but haven’t said where they will be brought ashore. We don’t need to get up yet,” she added. I lay back down, trying to reclaim the warmth of the sleeping bag. Lesvos was surprisingly cold in mid-March. 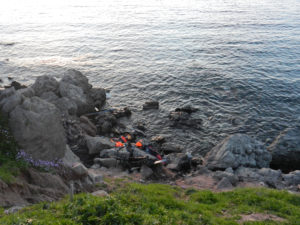 An almost transcendent beauty staged the perilous journey made by thousands of asylum-seekers who risked their lives crossing by boat from Turkey to Greece, a journey of less than ten miles, as the crow flies. Pristine waters, in varying shades of bright blue and turquoise, surrounded the Greek island where I was volunteering with a grassroots Greek organization. The hillsides were green and covered with wildflowers. Bright orange lifejackets and clothes that had outlived their usefulness could be found in many an unassuming corner of the island: in olive groves, on hillsides, along shorelines and roads. 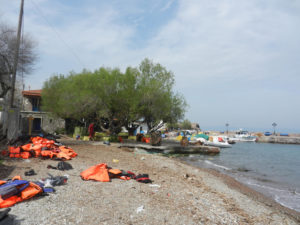 They served as reminders of the thousands of people who risked their lives to make the dangerous and expensive voyage to Greece. I always wondered how many of the lifejackets I saw lying around were “real”. The smugglers were infamous for giving people – many of whom could not swim – fake lifejackets.

The number of boats with refugees crossing from Turkey to the northern part of Lesvos had diminished greatly in recent weeks. We could see large NATO ships patrolling the waters from our lookout point. These ships used radar to identify where boats were trying to cross, and then Frontex – a European Union boarder patrol unit – sometimes in coordination with the Greek and Turkish coast guards, would divert the boats. Due to the heightened number of patrol boats in front of our stretch of the sea, asylum-seekers and migrants started taking different routes to avoid interception

Radio static filled the room again. Wherever this boat was coming from, it was miraculous they made it past the extensive surveillance and interception system in place. I couldn’t go back to sleep. I got up, splashed water on my face, and pulled on several layers of clothes to try and keep the cold at bay. 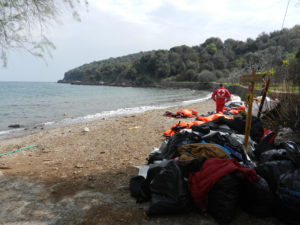 Walking towards the sea, I ran into the volunteer on duty. She was a psychologist who worked with refugees in France. The grassroots solidarity movement in support of asylum-seekers and migrants in Greece was hearteningly international in nature. “The boat is coming here, and no one is answering their phones at the apartment,” she said. They hadn’t announced the final destination on the radio. I returned to the one bedroom apartment that housed six of us, announced the arrival of the boat, and then made my way to the small port. I could see two lifeguard boats accompanying the boat ashore. As they entered the port, lifeguards shouted instructions in Arabic to the man steering the boat who was clearly new to his role. A loud cheer erupted from the boat when it became clear to everyone onboard they had actually made it.

As people clambered out of the boat and onto the pebbly beach, volunteers from several different organizations greeted them. A medical team checked the new arrivals for health problems. One little girl hung limply in her father’s arms, barely responsive. She’d contracted meningitis about a year ago.

I ended up helping a pregna 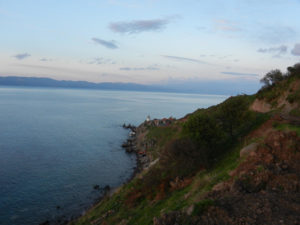 nt woman traveling with six young children, three of whom were the children of relatives who already crossed into Europe. Her youngest was a little boy with a cast on one arm. The cast was curved at a funny angle, and looked suspiciously like it wasn’t doing its job. He was crying. There were two little girls – twins. Three years old. One of them was inconsolable. She’d been crying since they landed. Now she screamed even louder in the arms of another volunteer who picked her up. I extended my arms to her twin sister who watched the proceedings with serious green eyes. “Come here my dear,” I said in Arabic. She didn’t protest being picked up. Her clothes were soaked with seawater from the voyage. Her little hands and feet were cold. It was time to get her into dry clothes. Together, we walked half a kilometer to the changing tents. All the while, my little charge stared up at me with solemn eyes. This little girl and her family were Yazidis from Sinbar in Iraq. The plight of the Yazidis first grabbed news headlines in August of 2014 when the so-called Islamic State began a genocidal rampage against them. I could only imagine what their family had been through. Chaos ensued for the next hour at the changing tents, as approximately 70 people tried to find clothes and shoes that fit them and their children. Eventually everyone was in dry clothes. It was when the boxes of fruit juice were passed around and drunk, that my little charge came to life and started exploring her surroundings. The young men were outside taking selfies sporting sunglasses and freshly slicked back hair, tweeting their arrival and updating their Facebook status. Kids were playing outside underneath the olive trees surrounding the tents. People were adjusting. It would still be several hours until UNHCR would arrive and take the new arrivals to Stage Two, where they would be processed. If eligible for asylum, it was likely they would live in limbo for many years. Undoubtedly it would be frustrating, but at least they were safe. They were the lucky ones: they’d arrived before the March 20th deadline, when the EU – Turkey deal came into effect. 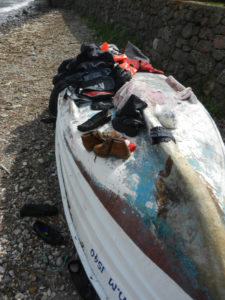 Those arriving on or after March 20th, regardless of their individual situation, would not be given the option to apply for asylum in Greece, but automatically returned to Turkey. Forcibly repatriating asylum-seekers is in direct violation of International Human Rights Law, which established the right of people to seek asylum from persecution in other countries. As a result of the increased difficulty to reach Greece, asylum-seekers and migrants have turned to more dangerous routes, resulting in the death of hundreds recently, as boats have capsized and sunk off of the coast of Libya.

One other boat arrived during my time on Lesvos. The boat was filled predominantly with Afghans, one Syrian, and one Iranian. They arrived after the March 20th deadline. I will always wonder what happened to them.

Have you ever sat back and reflected upon your life? The fact that you were born into a certain family, religion, country, at a specific point in human history? I come from a country that is not torn apart by war, or controlled by an authoritarian regime that makes it difficult to thrive. We have our own challenges, certainly, but civil war is not one of them at the moment. So what is the appropriate response to others who are not as fortunate as we are? John Rawls was an American moral and political philosopher spent a lot of time thinking about what is just from a moral standpoint. He developed an idea he called “the veil of ignorance”, which he said was necessary to ensure our thinking was just – to navigate our own inherent biases and preferences. Consider the following scenario: what if at the flip of an existential coin, you had a 50-50 chance of waking up tomorrow morning with your family in either Syria, Iraq, Afghanistan, Somalia, or the Gaza Strip? What rights and opportunities would you want given to you and your loved ones, if you had a very real possibility of finding your lives in mortal danger? The truth is that we’d all want the right to leave and seek asylum in a safer country; that we’d want the opportunity to try and build some semblance of a good and stable life for our families elsewhere. If we were honest with ourselves, we’d also admit that if the opportunity were not freely available to us and we had no other option, we’d seek it out.